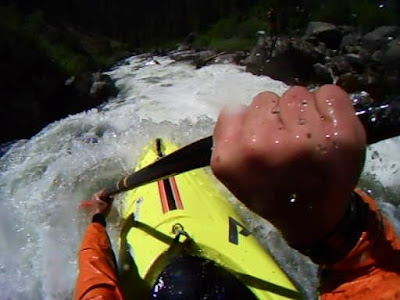 Lets just quickly get down to the goods (and not so goods) of what's been going down at Stone and Water. First off, I have gotten a new creekboat that i absolutely love. It is the DragoRossi Critical Mass. I first tried it out a few weeks ago when the DR rep stopped in town and I was looking for a new big water boat. Well, after trying it out, this 8'11" 84 Gallon boat performs better than i could ever imagine in big water. Its super fast and tracks really well. Staying on line and making tough moves with fewer paddle strokes. Its great. But does it creek? I had my doubts until I tried it out on a long paddling weekend. The boat has enough rocker that it'll boof what ever you need it to without catching the stern. It turns on a dime actually paddling like a short creekboat and the length of the boat makes driving over boils a snap. All in all. Its awesome. Gotta try one out.

Here is the boat in action. I've been looking at these roadside rapids called the Middle Fork Payette Steeps for almost 3 years now, always seeing the line, but never having the nerve to fire them up because of all the wood and super sticky holes intermixed with technical moves requiring exact boat placement.

You can check out the boat yourself at www.dragorossi.com and if you are in the US and want to try one out, contact Tony Z at dragorossinorthwest@yahoo.com


Here is some bonus video of Aaron Swisher attempting to kayak off 65' tall Jump Creek Falls located less than an hour from Boise near the farming town of Marsing Idaho. After a week of flash flood warnings throughout the Boise area, Aaron and I decided to go try to get several runs I have been looking at done, hoping to be able to run the flash floods. But when we got to Jump Creek Falls, the water was up a little but still pretty low. I was pretty concerned with the green water at the bottom of the falls so I opted to "ghost boat" my kayak off the lip to see what would happen. It had a perfect line that would of only required someone to be sitting in the seat to clean up the drop very nicely. After seeing that Aaron decided he was all about going. I climbed down and set safety...

This drop has yet to be run clean. All it'll take is a good rain storm for the water to come up to a much better flow. Shortly after Aaron's attempt, a micro burst hit and the flows more than tripled off of the lip, making the landing look rather inviting. I think the key is to catch it immediately after a heavy rain event or a rain on snow event.